What the Surprise Was

So the weekend surprise I couldn’t tell you about was my friend’s surprise bridal shower/bachelorette party!
It was two weekends ago (I had a horrible cold last week and wasn’t a person – that means I haven’t run and I didn’t blog)
Back to the bridal shower weekend!
Friday night I stayed at my friend Jackie’s house and we made a wishing well for the shower. It was a nice relaxing Friday night. (My cold had already settled in and I was super tired.) 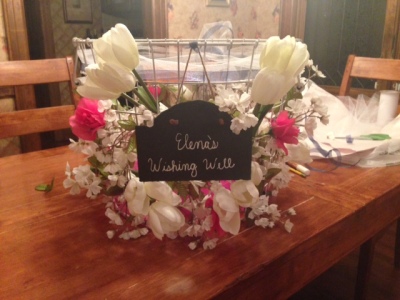 Saturday was the big day! 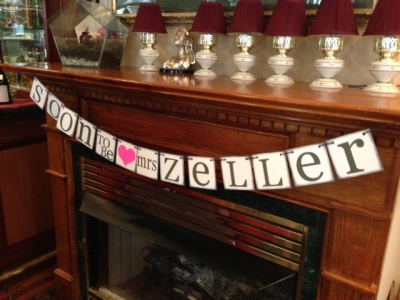 The decorations at the shower were so cute! The party favors were delicious cupcakes. You can’t go wrong with cupcakes. 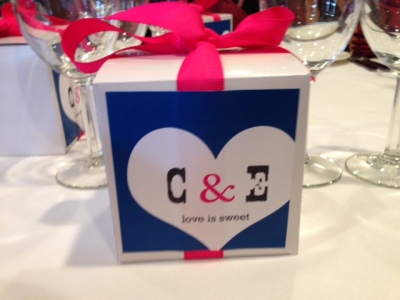 The bride-to-be is in the middle – with the silver dress on. We’ve all been friends since Senior year of college.

The day wasn’t over after the shower – Elena had another surprise! Her Bachelorette Party!

We had a little pre-party and then took a party bus to Atlantic City. It was so much fun and I’m pretty sure Elena had a great time!

After this fun and crazy weekend my cold really hit hard and I didn’t go to work for two days. I was so sick and I still haven’t run yet… Tomorrow will be the first day back. I’m now a little nervous about the Eugene Marathon… It’s a month away! yikes! Stupid colds…

I hate being sick.

I thought I was cold free. Friday I felt great! Went to Pure Barre class, met up with Ryan and we (he mostly) made the best pizza ever!

Then I woke up on Saturday and I felt WORSE then I had all week! What the heck!? Totally not fair. So… I waited and waited and by 9:30pm I knew I had to e-mail the Flyers and tell them I wouldn’t be able to pace the 20 miler today. I hate cancelling plans! ugh.
I hate it.

This week I just have to really work hard on getting better. The Staten Island half marathon is on Sunday. My goal is to be back to 100% and back to running. I hope my body hasn’t forgotten how to run. You know, since the marathon is a month a way! YIKES!

Back to Running on Sunday

This Sunday I’m running 20 miles. Oh, and I’m a pacer for it too… And I haven’t run at all this week. You, know… because I had a cold…

I am happy to report that I’ve beat the cold and I’m all better! But I’m interested to see how these 20 miles go on Sunday. I’m nervous!

What’s really cool about the run on Sunday is that we’re going to run part of the NYC Marathon course! This will definitely be helpful during the race.

Tonight I’m heading back to Pure Barre! This I’m excited about! I love the class! The workout is super hard and your legs are like jell-o afterwards but I LOVE IT. It’s totally different from running and it reminds me of being back on dance team in high school 🙂

I’ll leave you with this picture of me and my friend Marc. I paced him in the Race for the Cure 5k. We beat his goal time by almost two minutes!!!

I have a cold. This is horrible timing.

Last week I took off from running. I called it my Vacation Week. It was fun, I was social – I got other things done – there’s way more going on in life than running, you know?  I ran once – 5.5 miles.
I said I’m going to come back strong next week! Really get my runs in and make them count.

I started off the week great! Monday night – cross-training! I took my first Pure Barre class and it was awesome!
And then I woke up Tuesday with a sore throat… and then I woke up today with a cold. LAME.
I didn’t run last night and I’m probably not going to run tonight…
AND Sunday I’m suppose to pace lead 20 miles with the Flyers! Talk about bad timing, huh? 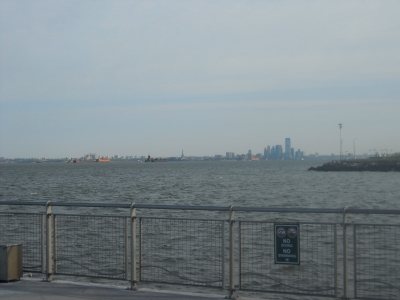 The views from the pier in Brooklyn were pretty amazing. On one side the Statue of Liberty far off in the distance. 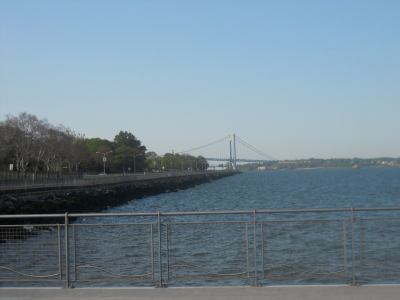 On the other the Verrazano Bridge! The race started at 9am and it was FREEZING. Though the sun was out the wind coming off the water made waiting for the start of the race miserable.

Once we started running and as the time passed the temperature got warmer and it was the perfect day for a race! It took me about 3 miles to get in race mode. It was weird, I felt like my body was moving super slow but I would look down at my watch and see I was running at a 7:45 pace.

Ryan was there to cheer me on and took this awesome photo of me right before I finished!

Like the web site said, this was a flat course. Which means fast times.

Going into the race I was a little worried. I had gotten a cold on Thursday, had only ran once that week and just didn’t feel that prepared. My goal was to stay under an 8:20 per mile pace, which would then beat my previous half-marathon best time. And I did just that!

Around mile 6 I noticed that two guys were running between a 7:40 – 8 minute pace. Exactly the pace I wanted! So for a while I just focused on keeping up with them. At around mile 8 I decided to ask one of the guys if it was okay that I run with them – since I thought it might be kind of creepy if I continued to run along side of him for the rest of the race… He said sure and he talked a little bit and really just paced each other. I think it helped both of us get a fasted time. I never got his name but I definitely owe him thanks because I know I would not have run as fast if it wasn’t for him. So thank you – guy that I ran with! 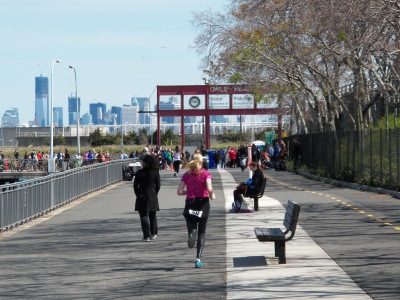 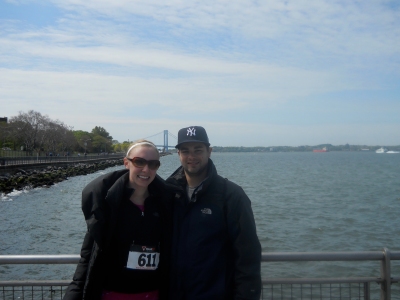 Saturday was the perfect day. A great race, followed by a HUGE breakfast, a nap and then dinner and a movie with Ryan. I couldn’t have asked for a better weekend. Now I just need to beat this cold for good!

Side aches are annoying

I’m still feeling a bit off but I did get in a great run tonight. I hit the treadmill hard with the Red Rock half-marathon in the back of my mind. Though towards the end I had to slow down because I wasn’t feeling too great I’m pretty proud of this run and I can’t wait to see what I can do once I feel 100%. It’s still a little hard to breath (go away cold!!!) and I did have a side ache for most of my run.

My goals for the rest of the week:

– Wake up early tomorrow and run. Speed does not matter. I just need to get miles in!

– Run at least 6 miles either Saturday or Sunday.

So far I’ve drunk EIGHT bottles of water today (those are the caps)… I am fighting this cold/whatever it is to the death! I’m going to win!

By the way – Drinking eight bottles of water means lots of trips to the restroom. Like every 30 minutes… It’s crazy!

PS – 100% chance of snow tonight and tomorrow. This may be the hardest half marathon I’ve ever run. Let’s do this! I can’t wait for the bagel afterwards… and the sushi dinner that night! yessss

So I think my body is trying to decide if it wants to be sick or not. Yesterday I woke up with a mini sore throat. NOT GOOD. I have a race on Saturday – Body – Didn’t you know this!? I don’t have time to be sick. So, I need to kickstart into action and beat this thing before it gets going. Emergen-C packets have been taken, lots of sleep will happen, and I’m not sure if I’m going to get a run in before the race.

What foods are you suppose to eat? Lots of fruit? Right? And lots of water? 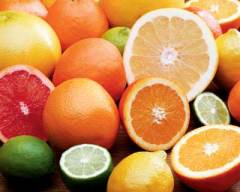 Though I wasn’t feeling too hot last night I did do this ab workout. It was super hard but awesome. And I could do it in my apartment while watching TV. Perfect 🙂

Filed under Races, sick, Tone it Up!

We can’t put ornaments on the bottom…

I was too sick to run the race on Sunday… I know I could have run it but I would have been miserable and I probably would have gotten more sick. I also want to be fit and healthy not only for Christmas but the Manhattan half marathon that is a little more a month away! I need to get some ten-mile runs in! 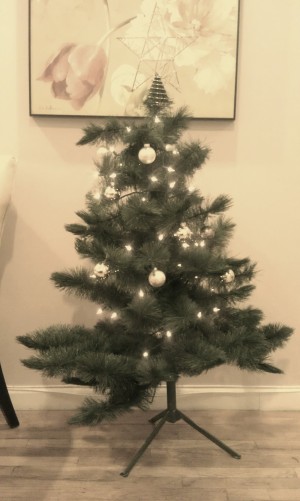 So I just slept a lot this weekend. Cleaned. And put up this little tree… It’s our own Charlie Brown Christmas tree. We can’t put ornaments on the bottom because my cat attacks the tree. Fun times over here on the Upper East Side. haha

The weather was great this weekend and the few times I did go outside it was wonderful.

Have any of you tried this ice cream!??? It might be my favorite… I bought it on one of my outings this weekend. Try it. You will thank me 🙂

Ugh. I’m sick. I’ve gotten a cold and right now it’s winning. I can’t really breath and I’m nervous I might not  be able to run in the race this Sunday… My plan is to just sleep lots and lots tonight and tomorrow and hopefully I’ll feel close to normal by Sunday morning. Oh and I did get in to the Manhattan half!!! woot woot!

To lift my spirits I bought sushi last night…

And I’m writing my Christmas cards to my family and friends.

Here’s the course map for Sunday. Let’s all cross our fingers that I’m better by then! Thanks! Happy Friday!